While most of my blog posts on here are to spread the news about recent celebrity engagements – and to share pictures of the new bling they’re rocking on their finger – it has been a rather slow period of engagements since my last update about Jennifer Lopez and Alex Rodriguez.

With this lull in the news to share, I did some searching for other engagement news and there is new speculation that Hollywood actress Emma Stone may be engaged. As reported by Elle.com, she was recently seen out and about with a new diamond ring on her left ring finger, which of course gets all the gossip magazines talking about what this could mean in her personal life.

Did Emma Stone and Dave McCary Get Engaged?

It seems like any time a celebrity is seen with a ring on their finger, it becomes fodder for all of the magazines that make a living digging into the private lives of film and television’s leading women. This time around the focus of speculation is Emma Stone.

Stone has always been pretty private about her personal life, so there is no real story to go on other than the fact that she is now wearing an engagement-like ring on her finger. Is it just an accessory, or could it mean something more? 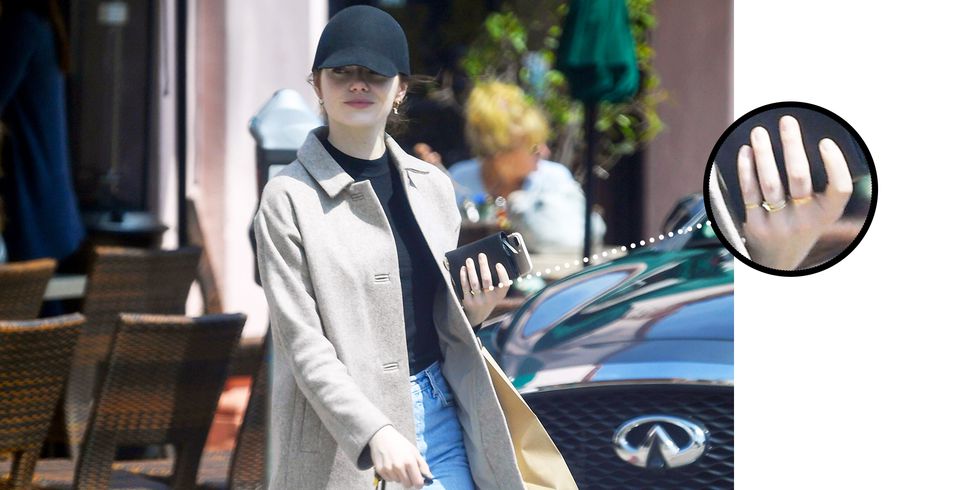 Stone has been dating SNL writer Dave McCary for some time now, so of course, the rumor mill is going into full swing with the appearance of this new jewelry on her hand. They started dating in October 2017, though it was largely under wraps until they debuted together at the SAG Awards earlier this year, however, in a sneaky way. They did not walk the red carpet together, but they posed for photos alongside each other inside the venue. Not long after that, they attended a basketball game together.

With Stone slated to host SNL next week, where McCary works, it’s possible they’ll find a way to work it into the content of the show and set the record straight. Maybe this gossip will find a way into her monologue? Then again, with how private she is with these kinds of matters, maybe we won’t hear anything about it at all. Furthermore, maybe the diamond ring is just an accessory and not a sign of relationship news.

Who knows? I guess only time will tell. If any updates come from this story, I’ll be sure to keep you updated in the blog.

Make sure to check out my preferred diamond ring seller, JamesAllen.

Clark Walker has been a diamond and rare jewelry savant for as long as he can remember. When retirement commenced and world travel became his new passion, he quickly realized that he needed a stimulating side hobby. Through this website he continues this passion for education, guidance, and keeping tabs on the industry.